Skip to main content
It looks like you're using Internet Explorer 11 or older. This website works best with modern browsers such as the latest versions of Chrome, Firefox, Safari, and Edge. If you continue with this browser, you may see unexpected results.

The Pearl Journalism Forum 2017: Finding Truth in the 21st Century will involve a moderated panel discussion with local journalists on the issue of media literacy and media consumption. Independent journalism and freedom of press are fundamental pillars of democracy as they act as checks and balances over the ones who govern. However, increasingly more news sources have been bypassing journalistic procedures and contributing to the decline of journalistic standards and ethics. Such practices allow for a large increase in circulation of distorted or false information with an intent not to report objective data-driven information, but to sway and influence news consumers. 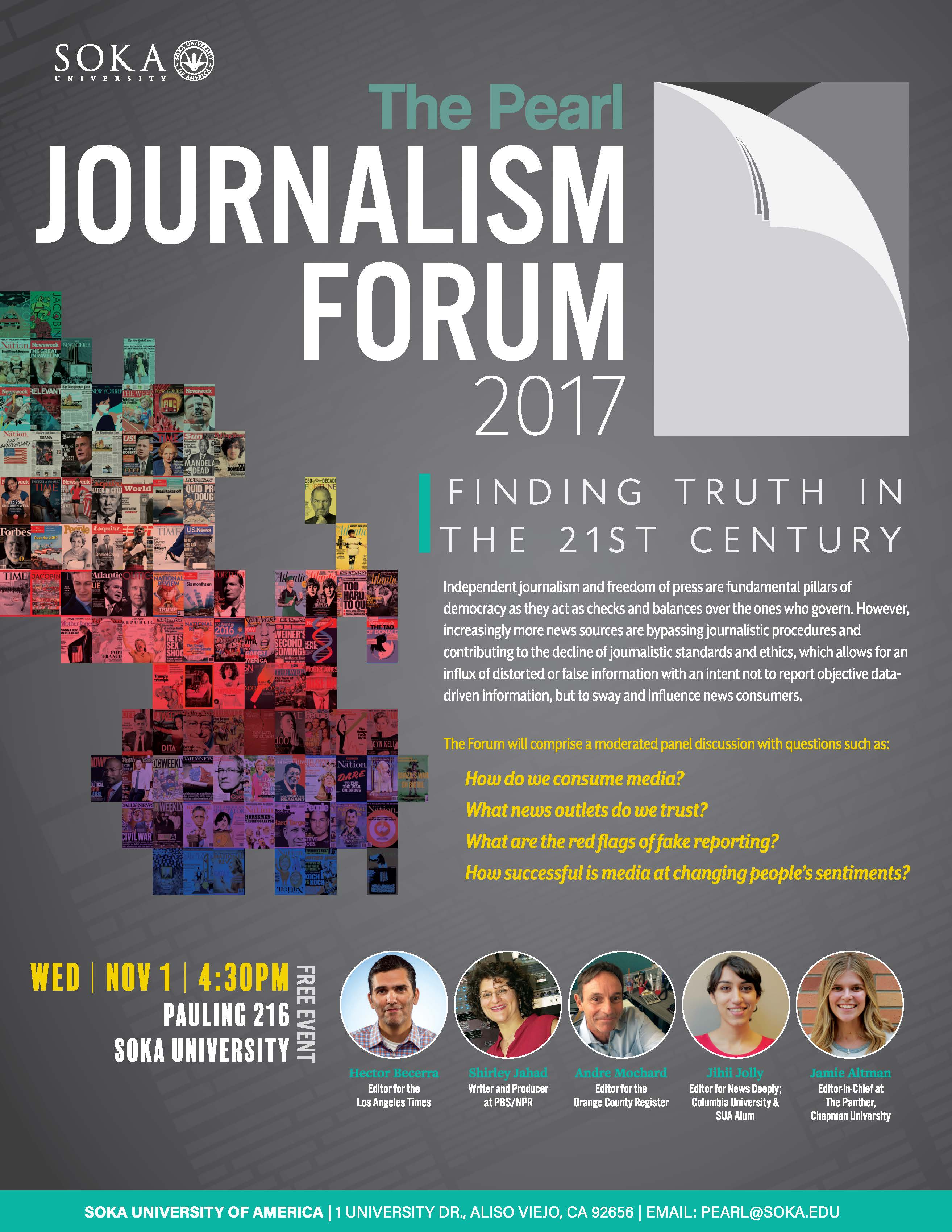 Hector Becerra (LA Times)- A native Angeleno who grew up in Boyle Heights, Hector Becerra’s first foray into journalism was as the editor of the University Times at Cal State Los Angeles. Becerra was part of the team of reporters that won the Pulitizer Prize’s Public Service award for their coverage of the city of Bell corruption scandal. He is now the morning assignment editor for the California section.

Jihii Jolly (News Deeply)- Community Editor at News Deeply, a network of single-subject information hubs, where she focuses on issues affecting women and girls in the developing world. Jolly has written and produced stories for the Columbia Journalism Review, and The Atlantic. She holds a Masters Degree from Columbia University’s Graduate School of Journalism, and a Bachelor’s Degree from Soka University of America.

Jamie Altman (The Panther)- Altman is a senior at Chapman University, where she studies broadcast journalism and public relations. She is editor-in-chief of Chapman University’s student run newspaper, The Panther, which won Best Newspaper at the California College Media. Association awards last March. Jamie has helped The Panther tackle stories about sexual assault, mental health and the political climate on a college campus.